If you want to write about puffins in a book titled THE PUFFIN OF DEATH, you go where the most puffins go -- Iceland.

I'll admit that the thought of going to Iceland didn't thrill me at first. I've lived in Arizona long enough to dread mushing through waist-deep snow, and the very idea of sub-zero nights almost kept me off my early-morning flight on Icelandic Air. But now, safely home in the 115-degree Sonoran Desert, I'm glad I conquered my misgivings and boarded that flight anyway.

Imagine my surprise when several hours later, I was strolling down the street in Reykjavik, Iceland, in a balmy 70 degrees, shedding coats and sweaters as I walked. It was August, after all, and apparently I -- like many people -- had confused Iceland with Greenland (which really IS cold!).

Trepidations aside, as a former journalist I've always believed in hard-core research, and as a mystery writer you can't get much more hard-core than travelling to every spot where the murder take place. Well, actually, murders, plural. If you've read my earlier Gunn Zoo mysteries, you know that murders are like potato chips; you can't have just one. But this meant that I had to travel from one end of Iceland to the other.

During my two weeks in Iceland, I spent nights in Reykjavik, the country's sophisticated capitol; the beautiful fishing port of Stykkisholmur, on the Snaefellsnes Peninsula; the quaint seaside village of Vik, known for its famous black sand beach; Gullfoss, where no protective fence keep you away from the double waterfall; the slopes of Eyjafjallajokull, the active volcano that disrupted European air traffic for weeks; and the spooky Thingvellir, where the great continental rift is slowly separating the European shelf from the North American. In Thingvellir you can almost hear the continents grind as they pull farther and farther from each other.

My adventures were many, and some of them made their way into THE PUFFIN OF DEATH. For instance, there was my scary-beautiful ride on one of the famed Icelandic horses, where I learned that no matter how much you've ridden in the States, you're not quite prepared for the somewhat alien gaits of that noble breed. Accordingly, I put my zookeeper sleuth up on an Icelandic horse named Einnar, who took her for a ride she'll never forget.

Probably the biggest surprise of all, though, came from the wonderful Icelandic people themselves. These descendants of fierce Vikings warriors turned out to be some of the most pleasant and well-educated folks I've yet run into during my travels. Iceland enjoys a literacy rate of 99%, which means Icelandic bookstores are invariably packed with standing-room-only crowds. And my worries about not being able to speak Icelandic -- a language almost unchanged since Viking days -- turned out to be as fact-based as my worries about waist-deep snowdrifts in August. Because not only does every Icelander speak fluent English, they speak it much more correctly than do most Americans. No "ain't"s, and certainly no "I done seen it."

Now back to those puffins. The sight -- and sound -- of a million puffins winging their away across the slopes of an ancient volcano just outside Vik is something I'll never forget. I was so awe-struck by the goofy-looking little birds that I changed the site of PUFFIN's first murder to Vik. I'd originally planned to kill the gazillionaire Simon Parr outside a bar in Reykjavik, and to bring in the puffin colony much later. But in the finished book, Parr -- a birdwatcher, besides being stinking rich -- is found shot in the head and stretched across a puffin burrow, his nose chewed on by a furious puffin mama protecting her chick.

Yes, puffins nest and lay their eggs underground. That's something else I learned in Iceland.

And this brings me to probably the most important thing I learned during my trip. Yes, do your research -- but stay flexible. If a better idea occurs to you once you're on site, go with it. Or as Mama Puffin would tell her chick if she could speak, "Let your imagination fly, Sweetie." 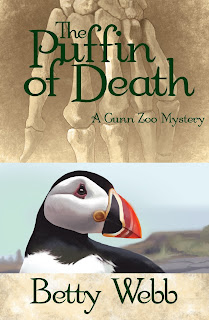 Your brief travel blurb is so interesting! I love your zoo mysteries and look forward to reading the latest--and looking for the fictionalized version of your Icelandic riding session. :)

Thank you, Dana! (And I'm so sorry it took me so long to answer you!

Did you know that you can create short urls with AdFly and make cash for every click on your short urls.

Puffin of Death so thoroughly transported me to Iceland that I am not at all surprised you were describing places you have actually seen. (Plus, I knew you were a journalist, so rather expected it -- but, even so ...) Just now finally catching up on the latest two Gunn Zoo mysteries, will be starting Otter soon. Each book thus far is even better than the one before.

(And, yes, need to catch up on the Lena Jones books, too, and shall.)